Today, Monkey Toes and I celebrate 10 years of marriage.  There are days when it feels like just yesterday we said, "I do," and then again, there are days when I don't remember life without him.  We have known each other for 20 years, being a couple for most of them.  In the beginning, when we were dating, many people told us that we weren't a good match for one another.  We seemed too opposite or we didn't have enough in common.  Truth be told, I simply loved spending time with Monkey.  Yes, we were different, but that was part of the attraction - at least for me.

The first few years, we were very immature.  We would be dating, then we would break up, and then we would get back together again.  We "worked" this way all through my college career.  Then after I graduated, we broke up - the best thing that ever happened for us.  I spent those 2 years really finding myself.  I know, it sounds cliche, but it is true.  I learned how to be by myself and be comfortable with that.  It was very liberating.  I discovered that I was missing out on life, waiting for someone to show up to do things with me.  So I began living my life.  I went to dinner by myself.  I went to the movies, by myself.  I walked along  Lake Superior by myself. I lived my life, learning to be comfortable with me.  I also prayed at this time that I would be open to living out God's will for my life.  I told God, that if I am meant to be single, then I will graciously accept His will for my life.  But then when I would fantasize about being married, it was always Monkey Toes face that I would see.  Then one day, Monkey Toes and I literally bumped into each other at Wal-mart.  Crazy - I know.  But being a woman of faith, I believe it was God's hand.

After the "bump-in", we became friends - no strings attached.  Once again, I realized how much I enjoyed being with Monkey Toes and I was content leaving our relationship at being friends.  We had tried to be more in the past and it didn't work.  I accepted that. Soon it became apparent how much we both had grown.  And once again, others were quick to give their opinion - "Are you sure you want to go down that road again?"  The turning point for me was when my grandmother became ill.  I was living 3 hours away and I received a phone call to come home.  Monkey Toes took some time off of work to just sit with me while my grandmother was dying.  I will never forget the day that he came to her room to sit with me.  My grandmother was sleeping and I was sitting by her bedside, crying.  Monkey Toes just held my hand.  Grandma woke up and saw him holding my hand and told me that she liked Monkey Toes very much and that he was a good man. In some way, I felt as though grandma had given her blessing on the two of us.

We were now a couple.  The moment I knew I wanted to spend the rest of my life with him, was when he called me one afternoon at work and said he had signed up for the RCIA program at his church.  I cried, knowing that God had answered a prayer.  I prayed for Monkey Toes daily to have a relationship with Christ.  I looked at my parents and their marriage and knew that the key to their relationship was faith.  I wanted that too for my life and whoever God placed there with me.  At the Easter Vigil  in 2001, Monkey Toes and his sister were welcomed into full communion in the Catholic Church.  I cried and rejoiced with them, all at the same time.  The following December, Monkey Toes asked me to marry him.

10 years of marriage and 6 children later, it has been a wild ride.  Life is certainly not dull.  There are still people who look at us and wonder how we work.  Yes, we are very different.  We do have different interests and we have opposite methods of how we function individually, but it when it comes down to what really matters in life, we are on the same page.  We share the same moral convictions.  We share a faith that is the glue that holds us together.  We have come to share the same political beliefs.  Faith and family come first in our lives.  We adore our children, but also know when we need to take time for "us".  So despite what others may think, we know that we are meant to be together.  God has a plan for us, and it began with our "I do's."

If I had it all to do again, I wouldn't change a thing.  Each step of the journey has led to this point in my life, which isn't too shabby.  It actually is a gloriously chaotic kingdom on earth, and I thank God everyday that he chose Monkey and I to share in it together.  I look forward to what the future holds for us. 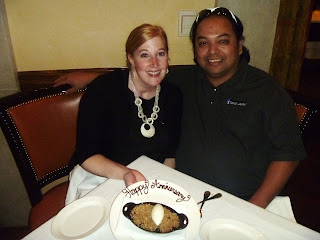