The Hills are Alive! 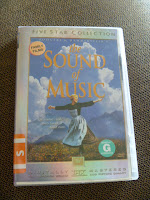 Last night my mom, Sweet Potato and I attended our Community Theater's production of the Sound of Music.  It was very well done.  One of Gummi Bear's classmates played the role of Gretl.  She was really fun to watch and did a great job.  The Sound of Music is my mom's favorite musical.  Growing up, we would watch it on t.v. every year at Thanksgiving (I think that's when it was broadcasted).  It was one of our family traditions.  So naturally, it has become one of my favorites as well.  Sweet Potato loved the production.  He sat attentively through the whole show.  At intermission, the woman he was sitting next to struck up a conversation with him.  "Are you enjoying the show?" she asked him.  "Yeah.  It's really good" he replied.  Then she said, "I hope to see you on stage next year at this same time."  Sweet Potato just smiled.

I discovered on our return trip home that I have never showed the film to my kids.  I have failed them!!  So today, we were on a mission to find the DVD.  Our local entertainment center did not have it, so we drove 15 miles to rent a copy.  When I have something in mind I try to see my mission through.  So tonight we will pop some popcorn and snuggle in for the 3 hour movie of the Sound of Music.  I can hardly wait!

As we were loading up the van for our mission, Sweet Potato tapped me on the shoulder and whispered, "Do you think I could try out next year for the musical?"  My eyes swelled up immediately.  I would love for him to try his hand at the stage.  I actually think he would do well, whether it's in the spotlight or behind the scenes.  I have no idea what production is in the making for next summer, but I will keep my eyes and ears open for auditions.

One regret that I have from my younger years is that I wasn't more involved in the fine arts.  I did participate in Speech for one season, but then I chose basketball overall.  I never had the courage to participate in theater, although I wish I would have tried.  I may not have been on-stage, but I think I would have enjoyed the behind-the-scenes support.  Monkey Toes played in the Orchestra for a number of productions and Silly (his sister) acted in a number of them as well.  By the way, she has one of the most beautiful voices I've ever heard.  If it were up to me, I probably would have "starred" her in all the productions!  Anyway.  If Sweet Potato is serious about wanting to get involved in the fine arts, I will support him all the way.  In the meantime, we will happily be singing Doe a Deer and Favorite Things.
Posted by Shelly at 3:25 PM