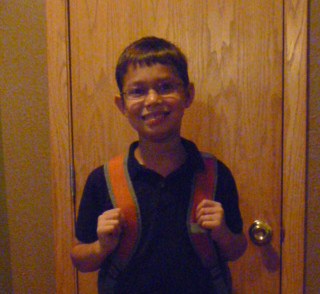 My oldest child is nine years old today.  I can't quite wrap my head around that.  He is a great kid and he makes me proud everyday.

I found out I was pregnant for the first time after experiencing a gall bladder attack.  The earliest I could have surgery was two months out - due to the surgeon's schedule.  Everyday I felt horrible and sick.  One day my sister said enough was enough.  She was taking me to Urgent Care to see if my surgery could be moved up at all.  After a few tests, the doctor came back and said she had good news and bad news.  The bad news was that my surgery would have to wait quite awhile, because of the good news.  I was pregnant.  I was a bit stunned.  We of course were open to the gift of life, but the reality of actually having a baby seemed surreal.

I couldn't wait to tell Monkey Toes.  We were living in a small, one bedroom apartment at the time.  We had one, very small window that looked out at the parking lot.  I stood by that window for what seemed liked hours, watching for when Monkey would pull into the lot.  Wouldn't you know, he was running late that night, and when he did get home, he had a pair of hockey skates draped around his neck.  He walked in the door and I asked, "what are those for?"  He said, "I've decided we should take up skating."  Ha!  I waited until he was eating supper and then gave him a card about being a dad.  He read it, looked at me, then looked back at the card and then smiled.  Then we got on the phone and started calling EVERYONE.

I was sick for my first trimester - as I have been for each of my pregnancies.  I also began to retain water very early on, forcing me to remove my wedding band and wear flip-flops.  Preparing for our first baby consumed our lives.  We bought a house, prepared the nursery, and did everything "by the book" (that would be the book, What to Expect When Your Expecting).  Two weeks leading up to the actual delivery, I was contracting every night, causing sleep deprivation for both me and Monkey.  Then every morning - in the early hours - my contractions would subside and we would go on with our day.  September 6th is a day that changed our lives forever.

I had been sleeping on the sofa, because I could no longer get comfortable in our bed.  I woke up with a sharp pain.  I told Monkey that I thought this was it and we should go.  We drove to the hospital, only to be sent back home.  I was devastated.  Physically and emotionally I was drained and I cried most of the way home.  Monkey ran a bath for me and as I sat in the tub, I began having contractions, very close together.  I called for Monkey to time them and he said they were about 3 minutes apart.  I told him we were not going to the hospital until we were certain I was in labor.  I didn't think I could handle being sent home again.  Being a little nervous, Monkey called my sister who is a nurse and she happened to be working in town that day.  She came over and said she was making the decision for us.  It was time to go to the hospital NOW.

We arrived at the birthing center and our room was awaiting us.  There was little time to spare as my contractions were now on top of each other.  The doctor came and said it was time to meet this little person.  My sister and Monkey Toes were in the room with me.  When Sweet Potato was born, my sister yelled out, "It's a boy!", before the doctor could announce it.  We were ecstatic.

For me, it was love at first sight.  I couldn't take my eyes off of him.  The first evening we were home, Monkey Toes sat in the nursery all night, watching Sweet Potato sleep.  That of course wore off by the third night, but none the less, it is a memory I hold very dear.

Today, Sweet Potato is a bright and enthusiastic kid.  He loves sports (especially statistics), game shows, desserts, family get-togethers, and what I sometimes refer to as "useless" knowledge.  He is compassionate towards others hurts and likes going to Mass and yes, even confession.  This young lad of mine, who often worries like I do, stole my heart 9 years ago today.  I don't ever want it back!  I love you Sweet Potato - always and forever!
Posted by Shelly at 8:36 PM