Are You Ready For Some Football?

I am happy to report that I did not go to jail over the weekend, thus I was able to accompany Monkey Toes and my boys to the Vikings game on Sunday (refer to my Jailhouse Rock post).  We left early so we could attend Mass at the Basilica - something Honey Bunches has been asking to do for quite awhile. 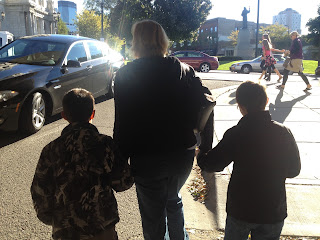 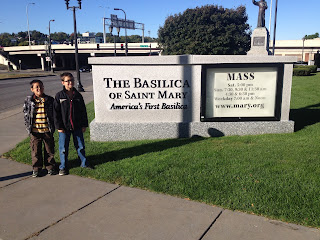 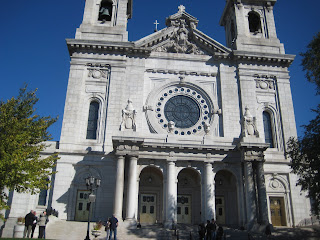 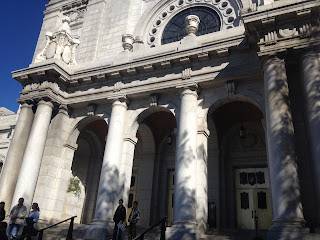 The kids were in awe of this magnificent structure.  It really is quite remarkable.  Immediately following Mass tours are give and Honey wanted to stay, but time was passing quickly and we had a noon kick-off. 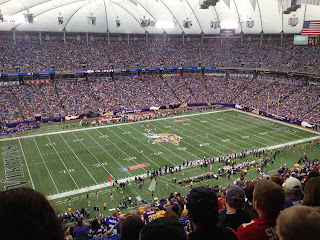 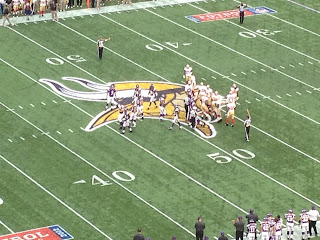 I have commented before about how much I enjoy "people watching."  Let me say this; a professional sporting venue trumps any other place to be entertained by people in their fanatic environments.  As exciting as the game was to watch (The Vikes pulled off a very impressive win!), the people seated around us amused me, dare I say, just as much.  The gentleman seated in front of us would flash these hand signals after every play (nothing inappropriate).  I believe he was imitating the refs.  The couple seated behind us and a little to the right would make-out each time the Vikes scored (gross!).  Three rows ahead of us, a young man would do a gallop dance within his 2x2 space, after each call in favor of the Vikings.  I saw women with purple and gold streaks in their hair and nails painted to match.  I saw a 20-something male wearing long, satin purple gloves.  A mother dressed her newborn in a Vikings helmet with braids.  There was a young couple seated in front of us who enjoyed taking self-portraits of themselves at the start of each quarter.  We're talking 3 full hours of entertainment and the game was a bonus.

After attending this game, I understand people's enthusiasm.  The excitement was electric inside the dome.  It was very easy to get caught up in the cheering and jeering and high-fives with people I didn't know.  It was exhilerating (and a little exhausting when all was said and done).  No matter the outcome of the game, it still would have been a great afternoon, because I spent it with the three guys I love most!