Our lives and our home are a bit chaotic these days, as we are undergoing some construction.  Hosting a birthday party simply isn't on our radar, however, I made arrangements to share in some one-on-one time with my sweet Cucumber today.  It was an immensely lovely day! 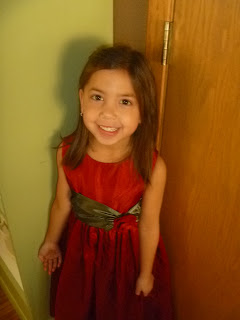 The first thing Cucumber said to me this morning was, "Today is my birfday and I want to paint my fingernails red."  Wish granted.  Next, I had scheduled her annual pictures.  For the record - this is the first time, EVER, that I have had any of my children's pictures taken by their birthday.  I'm usually a few months behind on this task.  May I just say, that Cucumber is so stinkin' cute!  I normally don't refer to my children as such, but my goodness, the girl can take a good picture.  Normally, the difficulty in portraits is getting the child to cooperate.  In Cucumber's case, it was painstaking to have to decide which poses not to order.

Cucumber asked for a sparkly crown for her birthday.  As we were exiting the portrait studio, she saw a toy that she insisted she needed.  I gave her the choice of either the toy or a crown.  She chose the toy.  Wait for it. . .Wait for it. . . . . .she selected a toy ATM machine.  Of course!  It was difficult to make that purchase, as I prefer toys with intent.  I somehow justified it (it cost $7.50) much to Cucumber's delight.  At this point in our day it was lunchtime.  I rattled off a number of restaurants for Cucumber to select.  I never once mentioned the Golden Arches, however, that is where we ended up, much to my dismay.  I know she is only 5, but I was strongly encouraging her to choose a "sit-down and have someone wait on us" kind of establishment.  I did remind myself that it was HER special day, and so onto the clown eatery we went.

Once inside, Cucumber asked if we could eat in the play area.  Allow me to share that indoor restaurant play areas really gross me out.  I don't want to get into my whole reasoning behind this, but let's just say I was a bit more at ease knowing I had hand sanitizer and wet wipes in my purse.  Cucumber had a great time playing.  At one point, she came over to me and asked if I knew the route to the red slide.  She couldn't find it in the mix of tunnels.  Since adults aren't allowed on the equipment, I told her to try a path she hadn't gone on yet.  Back up she climbed and suddenly I heard her exclaim, "You've gotta be kidding me!"  At this same time I was taking a sip of coffee, which wound up coming out of my nose.  Thankfully it wasn't very hot. 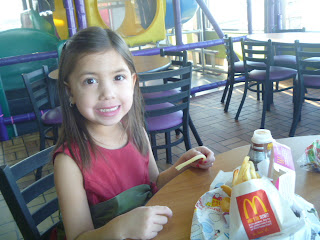 After playing awhile, Cucumber asked if she could have an ice cream cone.  I decided to take her to the DQ, as it was on our way home.  In the van Cucumber said, "Mom.  This is the best birfday ever."  She then gave me a thumbs up.  I loved that this simple outing made her so happy.

At the DQ while eating her ice cream, Cucumber thought she had a piece of the cone stuck in her teeth.  When she opened up for me to take a look, I saw a tooth barely hanging on.  Cucumber had no idea she had a loose tooth.  This bit of information had her so excited that she didn't want to finish her cone.  She wanted to get home so she could show her little sisters her new phenomena.  I thought she may explode with excitement as she waited for Monkey Toes to get home from work.   But wait, it gets even better (I know - it's hard to imagine).  Right before the kids returned home from school, Cucumber's tooth fell out.  Yep - she was wiggling it with her tongue and the little bugger just fell out on the table.  My goodness.  How much excitement can this little body endure?

Our evening ended with singing Happy Birthday and eating cake.  As we were saying our family prayers, Cucumber thanked Jesus for her "great day."  She concluded by saying, "thank you the most for my loose tooth that fell out and for it falling out on my birfday." 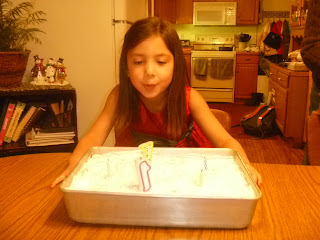 Cucumber looks at life as being bigger, better, more glitterier (that is a valid piece of vocab in Cucumber's world) than most.  She lives life with a touch of theatrics which brings laughter into our home each day.  She rarely checks in as undecided on many issues in a 5 year old world.  Her confidence, her girly-ness, and her beautiful smile are a few of the things I love most about her.  Happy Birthday Cucumber.  I love you! (Double thumbs up!!)
Posted by Shelly at 10:30 PM