Feast of the Archangels

September 29th was the Feast of the Archangels.  It is a tradition of the Church that dates back to the 4th century.  There are 3 Angels that are named in Scripture.  The first is Raphael (Book of Tobit), then Gabriel (Daniel and Gospel of Luke) and Michael (Book of Daniel and Revelation).

The Catechism of the Catholic Church teaches us that, "[T]he existence of the spiritual, non-corporeal beings that Sacred Scripture usually calls "angels" is a truth of faith. The witness of Scripture is as clear as the unanimity of Tradition."  Angels are pure, created spirits. The name angel means servant or messenger of God. Angels are celestial or heavenly beings, on a higher order than human beings. Angels have no bodies and do not depend on matter for their existence or activity. They are distinct from saints, which men can become. Angels have intellect and will, and are immortal. They are a vast multitude, but each is an individual spirit. Archangels are one of the nine choirs of angels listed in the Bible. In ascending order, the choirs or classes are 1) Angels, 2) Archangels, 3) Principalities, 4) Powers, 5) Virtues, 6) Dominations, 7) Thrones, 8) Cherubim, and 9) Seraphim.

To celebrate this Feast Day with my kids, we had a special supper - Angel Hair Pasta, of course! 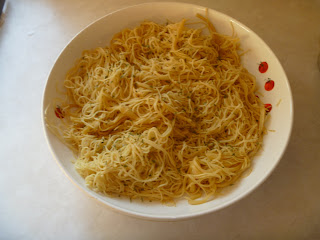 For dessert, Berries on a Cloud (Angel Food Cake would have been the obvious choice, but the kids liked the idea of making a cloud dessert). 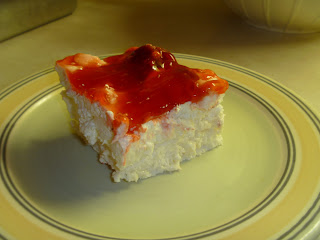 While the kids enjoyed their meal, I presented a lesson to them on the Archangels.  Here were my props: 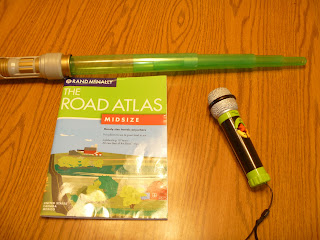 Gabriel is known as the announcer, thus the microphone.  Raphael is known to guide.  He was represented by the Road Atlas.  And finally Gabriel.  He is the Protector and Defender.  I used a light saber for him.  It's a little 21st century, but it was effective in getting the point across to the kids.  They thought I was goofy, but they giggled a lot and I think they learned something.  The proof came the next morning when I quizzed them on the way to school.  They remembered the angels names and the tools that represented each of them.  It was fun to celebrate with my children and teach them something about our faith.
Posted by Shelly at 10:33 AM