Today my Lil' Cucumber turns 4.  She is a bright, funny, and very independent little girl.  This morning she ran from her room and into my arms excitedly announcing that she is now 4 years old.  I praise God for this milestone in both of our lives.

When Cucumber was only 5 weeks old, she had a runny nose and sounded congested.  One morning, Honey Bunches of Oats woke up crying and tugging at his ears.  I decided to bring Cuke along to Honey Bunches doctor's appointment.  Sure enough, he had a double ear infection.  Then the nurse wrapped, what looked like a bandaid, around Cuke's big toe.  She then left the room and got the doctor.  In what seemed like a flash, we were on our way to the Intensive Care Unit.  I was told that Cuke would need to spend the night so her oxygen levels could be monitored.  While the nurse was setting up the bed, Cuke went limp in my arms.  I cried out and he immediately took her from me and began a nebulizer, yelling for someone to call our doctor.  Cuke took a breath on her own and began to cry.  The nurse wanted to hand her back to me, but I couldn't find the strength to take my daughter.  What if she stopped breathing again in my arms?  Fortunately, my sister was working that day at the hospital and was with us.  She took Cuke for me.  Then a few moments later, Cuke once again went limp in my sister's arms.  I remember my knees going weak and sliding down to the floor with my head in my hands.  How could this be happening when I brought her in because of a runny nose?

Cucumber began breathing on her own again and we were sent by ambulance to the Children's Hospital.  Once there, I had an overwhelming feeling of peace, somehow knowing that this was exactly where we needed to be and that we all would be o.k.  Cucumber was set up in her own room, with oxygen.  She was diagnosed with RSV and the only "prescription" was supportive care, thus the oxygen.  I rarely left my little girls side, except when the nurses would send me to go get something to eat.  Each morning, we were visited by a physician, who tested Cuke's oxygen levels, and each morning, I secretly hoped that we could stay for one more night.  I was scared to bring her home.  What if she stopped breathing and I couldn't revive her?  I did not have confidence in myself to care for her.  After 5 days, I once again felt at peace.  It was the first day I hoped we would hear the words, "You can take her home today."  That is exactly what I did.

Now, 4 years later, I see a beautiful, healthy, and vivacious girl.  I thank God for her, even in all of her defiance and sassiness.  This is a girl who one moment is wrapping her arms around me and saying, "I love you Mamasita," (I think she learned that from the Chipmunk's), and then the next moment is screaming that life is not fair. Through all of her mood swings, I love this little girl who has been entrusted to us.  Happy Birthday Lil' Cucumber.  I love you to the moon and back! 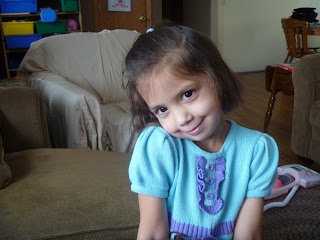