Time For A New Tradition

Our neighboring community hosts its annual Corn Carnival each August.  It is a popular gathering of not only the locals, but of folks from afar.  It is a sort of reunion for those who have moved from the area, but continue to return for the festivities.  As a child, it was the meeting place of classmates whom we may not have seen all summer, but would catch up before school began in a few weeks.  The Corn Carnival is a tradition for many and something that is looked forward to throughout the year.

Our family tradition with the carnival is to attend the parade on Monday and then return on Tuesday for rides and good eats.  We've operated this way for a few years and it has worked well, at least until this year.  As planned, we attended the parade on Monday evening.  The weather was beautiful.  The kids sat in their chairs along the parade route in great anticipation.  As is becoming the norm, this parade didn't throw out candy to the spectators.  I had pre-warned my children that they would not be getting candy.  Part way through the parade, Cucumber leaned forward and began to heckle the parade units.  She bellered, "Where's the candy?  I want some candy!  Why aren't you giving us candy?"  I was shocked, and a bit horrified.  I had to grab her by the shoulders and explain how this behavior is not appropriate.

After the parade, we walked down to the carnival.  The kids mapped out their ride schedule for the following evening and then we shared in some brownie sundaes from our church stand.  Upon our return home, it was discovered that we had some schedule conflicts for Tuesday.  It was decided that Grandma and I would take the Love Bugs to the carnival in the afternoon.  Each child received enough tickets for 3 rides.  We began by all watching Sweet Pea and Pumpkin ride Rock Town. 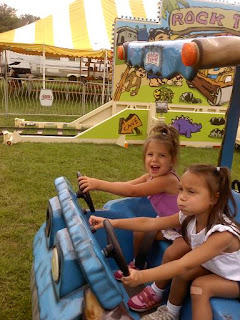 Then the 4 oldest decided to start with the Tilt-A-Whirl.  (Just a side note - Monkey Toes and I cannot do spinning rides.  We never could and never will.)  So the kids all got into one cart and began to whirl.  After the 3rd trip around, I heard Sweet Potato yell, "he's gonna puke!"  Thankfully, the attendant heard this and stopped the ride, much to the other riders dismay.  He told everyone to calm down; that he just needed to let someone off.  It was Honey Bunches that wasn't looking very well.  He actually had a little green tint to his face.  He and Sweet Potato got off, but the girls decided to continue to ride.  Although Honey Bunches never puked, he did begin to cry because he felt as if he had wasted a ticket on a ride he didn't enjoy.  I kept telling him he had two more tickets, but as he looked around the carnival, there were few option left for him.  From there, the 4 oldest wanted to try King Tut's Maze.  It is made up of mirrors.  After a short while, I heard Cucumber scream and start to wail.  The attendant had to walk in and "rescue" her.  The poor child sobbed and sobbed, even after we had left the carnival.  She continued to declare that, "I do not like that thing one bit!"  While trying to calm both Honey Bunches and Cucumber down, Gummi Bear used her last ticket on The Dizzy Dragon (fortunately she did not inherit mine or Monkey Toes inner ear) and the little ones chose The Bouncy Castle.  At this point, everyone but Gummi had one ticket left.  Cucumber settled on The Swings and the little ones and the boys chose The Giant Slide.  I had to climb the steps with Pumpkin and Sweet Pea to make sure they sat in their gunny sacks correctly.  Of course, once at the top, they both clung to my leg, refusing to go down by themselves.  Also, Honey Bunches chose not to go down.  His tummy was still not doing so well.  The first trip down I had Pumpkin on my lap.  Then I had to climb up those steps one more time for Sweet Pea.  At the end of the second trip, both little girls wanted to ride again, however, we were out of tickets (Honey Bunches gave his left over ticket to a friend).   Tantrums then ensued.

Grandma felt bad for Honey Bunches, so she offered to give him money to play a game of his choice.  He played a game and won a prize, which pleased him greatly.  At this point, the little ones are still throwing tantrums.  Also, it has begun to rain.  I now have a 3 and 4 year old sitting on the ground (because they refuse to stand up) and screaming, a 5 year old who decided to cry again because the memory of the Maze has traumatized her, and 3 older ones who are complaining that they don't like getting wet.  I firmly announced that we were finished and heading home.  The little ones screamed louder, the 5 year old cried harder, because we had to pass by the Maze to get to our van, and the older ones just took off running to get out of the rain.

We returned home wet and grumpy.  Naps were mandatory for EVERYONE, including me.  After some thought, I announced to the family later that evening what will be happening as we attend future Corn Carnivals.  We will continue to attend the parade, followed by whatever treats our church stand is selling.  We will omit rides and instead, spend our money on BINGO.  It's only .25 a card and we can play all night (if we factor in the amount of money spent on rides and substitute that on BINGO, each child could play 20 games!)  Surprisingly, the kids thought this was a great idea.  Thus, a new family tradition has been established.  Oh, and cheese curds.  Next year I want cheese curds!
Posted by Shelly at 10:40 AM