I love watching cooking shows and, more recently, have become a fan of Master Chef.  I could never be on a show like that and yet I am intrigued by those who can face such criticism from judges Gordan, Graham, and Joe.  Sweet Potato is actually the one who suggested we start watching it.  One of the few routines we have established this summer is that while the girls are napping, Sweet Potato and I settle in for an episode of Master Chef.  What I find endearing, is that Sweet Potato has begun using descriptive food phrases from watching that show.  I purchased some homemade bread and Sweet Potato said, "This has nice density."  During supper one evening he commented, "I like the layers of flavors in this dish."  And what always brings a smile to my face is when he reacts with, "This is amazing", no matter the simplicity of the dish.

Since he was very young (this child is only 10), Sweet Potato has shown great interest in cooking.  Like little ones oft do, he would wander into the kitchen, see me cooking and then push a chair up to the counter to see how he could assist me.  Not much has changed as he has grown up a bit.  Many mornings I find him sitting at the table, scouring through cookbooks, making meal and grocery lists.  I have to reign him in some, as his tastes can be a little more than my purse strings can spare.  However, last week, he had his heart set on a Lemon-Dill Chicken that I couldn't say no to.

He made out his grocery list and off we went. 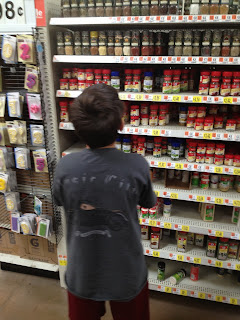 I'm pretty certain he only took me along so that 1:  I could drive him; and 2:  I could push the cart. 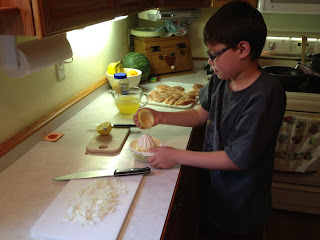 I was allowed to assist, only when he requested my help.  So my job consisted of trimming the chicken, chopping the onion (he said it was dangerous for him to attempt to chop through tears), and then removing the chicken from the pan, as it would spatter. 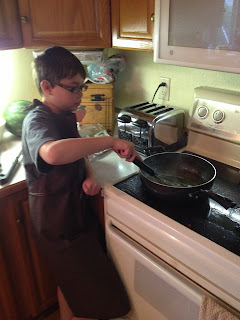 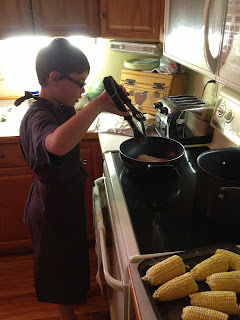 The end result was delicious!  It was tasty and pretty. 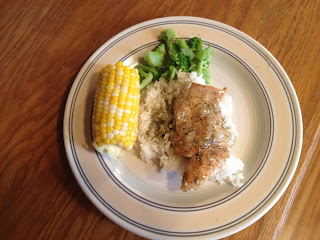 His siblings devoured it (I question if they would have eaten it if I had made it).  There were a few leftovers, which we sliced and tossed with angel hair pasta the next day.

I don't know if a cooking career is in Sweet Potato's future or not (right now he has his heart set on either playing in the NFL or being a priest).  Cooking is a skill he will have for a lifetime, so I will do my part to nurture that interest.  And who knows, maybe someday I'll be watching Sweet Potato on t.v.
Posted by Shelly at 8:38 AM