I've come to my own conclusion about "Minnesota Nice."  I imagine most folks think it has to do with our light-hearted, friendly demeanor.  And although that has much to do with it, I also attribute it to our ability to strike up a conversation with just about anyone, anywhere.  You see living where we do, well, people are ALWAYS talking about the weather.   You can be at the bank, at the gas station, in line at the post office, paying for groceries at the market, dropping kids off at school; it doesn't really matter, because the common denominator is the weather.  It is always considered conversation worthy, not dependent at all on who is listening.  As long as one is breathing, then there is always the weather to discuss.

Once again, we are digging out of another winter storm.  As tiring as this season has been, it is also quite beautiful.  Right outside our front window is a snow covered tree, with icicles hanging from the branches. Although I would much prefer looking at the tree in bloom, today it is very calming to look at.

Surviving this winter season, I believe, has much to do with attitude.  Someone recently told me that this year reminds him of winters from his childhood.  They were not unlike what we are experiencing now.  I think we have just been a bit spoiled in recent years, with mostly mild winters and not much snow.  So one of my keys to survival is to find the "sunshine" in my life each day. 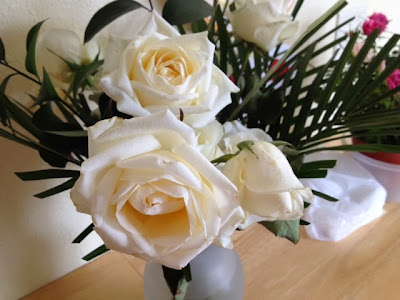 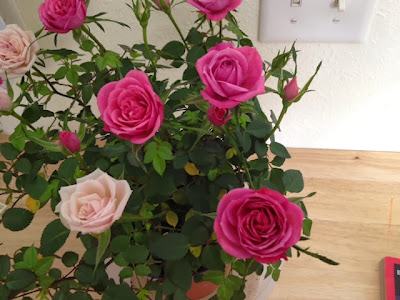 Now back to the title of this entry. One day last week we received a light dusting of snow.  It wasn't much, but it was enough to make the roads slick.  I was taking the kids to school.  I admit I was driving too fast for the conditions, and as the car in front of me braked, I realized that I was either going to rear-end him, or go in the ditch.  I opted for the ditch.  A curse word escaped from my lips and at that moment, the car in front of me turned, allowing me to slide right past him.  No harm done!  A few moments later, as we were all catching our breath, Sweet Pea asked, "Mommy?  Where did you learn that word?"

Yesterday, the snow began falling by mid-morning, and as the day progressed, so did the size of the snowflakes.  The roads were horrible - icy, snowy and slushy, all at the same time?!?!  I picked the kids up from school, and we began our very slow trek home.  Because it felt like we were sliding all over the road, I wouldn't take my hands off the steering wheel nor my eyes off the road.  Gummi, who was sitting in the front seat, cried, "Mom I have a bloody nose."  I yelled for Honey Bunches to grab my purse and pull out the wad of tissues I had in one of the pockets.  Shortly after, Honey asked, "What the heck kind of tissue is this?"  As I quickly glanced behind me I noticed he was holding a Maxi Pad.  I told him to put that back and grab the "regular" size tissues.