One week ago tonight, my Dad was inducted into his high school Alma mater's Athletic Hall of Fame.  Our family attended the perfect fall evening's football game, at which the Hall of Fame honorees were introduced at half time. 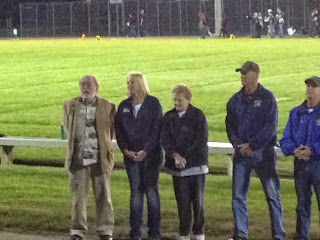 Pictured above are Fr. Gross (one of my Dad's classmates), Sissy #1 and my mom. Those three accepted the award on my Dad's behalf.  The following was read aloud as the award was presented.

"Duane Benoit was a 4-sport participant at KHS participating in football, basketball, baseball and track.  Duane was a right tackle in football, center in basketball and threw the shot in track. In baseball, he played first base.  He was a letter winner in 4 sports for 4 years.  Duane served as football and basketball captain, was the team MVP in basketball and football his junior and senior seasons.  He was also selected to the All-District team in 1948 and 1949 seasons.  He averaged 19 points per game and had a high of 37 points his senior season.  He was also one of the leads in the junior class play, "Little Men."  He also participated in FFA and 4-H.  After high school he continued to play basketball for the National Guard 147th infantry."

Sitting in the bleachers, listening to my Dad's accomplishments, was emotional for me.  Yes, I am extremely proud of my Dad, but what struck me the most was how many of his accomplishments I was unaware of.  I knew my Dad played basketball and a little football, but the rest was a surprise to me.  Proof once more of my Dad's humility.


Dad encouraged all of us to be involved, join teams and clubs, play honest and play hard.  He never placed pressure on us to be the best, but he did watch to see that we gave our best and played with heart.  That is what made him most proud.

I wish Dad could have been here to receive this honor himself.  But then again, he would have been slightly embarrassed and certainly emotional (for a big guy, he had a very tender heart).  And so, we celebrate his accomplishments, but more importantly, the character of the man being honored.